During my first canyon craze I remember starting with 13mm ropes and going through the debate over whether 11mm ropes were adequate or not… I missed the 9mm debate but they seemed to be the size of choice when I got back into it, and now the debate was 9mm or 8mm… Wasn’t 8mm just prusik chord!

My ropes were still 11mm and it was time to upgrade. When weighing up choices for a new rope I really liked the look of the Imlay stuff. Tom from Imlay Canyon Gear and CanyoneeringUSA seemed to be a passionate canyoner (canyoneerer) and I had heard people speak highly of his stuff,particularly the 8.3mm canyonfire rope.

Still I was a bit apprehensive. I’d tried a couple of 9mm ropes. Some were fast, especially when dry. Often having beginners in our group that was a bit of a concern. The 11mm ropes certainly help keep things under control.

My other concern was that I’m at the upper limit of weight Tom recommends for his 8mm ropes. Tom suggests a 200lb (90kg) weight limit to get good life out of the 8mm ropes in high flow canyon environs. Not that there is much of that in the Blue mts canyon scene

These factors combined had me steering more toward the 9.2mm Canyoneero.

But then I got the chance to have a go on some bigger abseils on two different Canyonfire ropes on a canyon trip to the South Wolgan.

On the first abseil, not knowing what to expect from the rope I rigged up with extra friction. It became obvious pretty quick that on a sloping drop that I’dd added way too much. The texture of the weave on the sheath seemed to give it alittle more bite and control.

The subsequent abseils and first hand review on wear rates and longevity had me sold. This was the rope I’d be investing in next and a month or so later I put in an order.

(The other factor that sold me was I offered to carry Julie’s rope for the trip. After being accustomed to lugging my 11mm ropes around, especially after they tripled in weight when wet, it was almost as if it wasn’t there.)

Colours: Colours are important to some, not so much to others. Pretty colours do help to distinguish your ropes and can be very handy remembering which end to pull on a big drop where you have two tied together.

Imlay have some funky colours to choose

Purple/Orange or Red/Yellow for the canyon fire

When ordering you can choose (order may take longer depending on availability of precut ropes) or opt to take what ever gets sent. I was happy with what ever but was pleased when the orange purple turned up.

It looks a bit different in the flesh. Standing back it looks pinky purpley orangey, to use a blokes knowledge of colour. and the pattern of the weave somehow makes the ends seemed slightly different, more orange up one end more purple at the other..

Ordering and delivery: This was pretty simple. I ordered direct online off Canyoneerusa and it was delivered to rural NSW Australia with in 2 weeks (I think it was 8 or 9 days all up)

Postage was reasonable and I added a few extra bits and pieces to to make it more worth while.

Cut Length: I ordered the 200feet deal which should convert to just under 61m. Pulling it out of the package and running a surveyors tape over it in the driveway  showed it closer to 63m. Tom guarantees the stated length is the minimum you get and suggests he usually adds a foot or two.

Handling: The rope has a stiffer feel to it. “Wirey” was the word Ed used. I have a theory that all new rope get knotted the first time you feed it through an anchor… Or maybe that’s just me. Surprisingly we didn’t get this one knotted but the wirey feel made it feel like it maybe more prone to catching up on itself. No real dramas were encountered on this first trip but it is something I’ll keep an eye on and perhaps its just perception not reality.

Control: All the abseils we did on this trip were beside the waterfalls and we kept the rope dry. I did note it ran a bit faster (certainly faster than the old 11mms) but not uncomfortably so. I used a glove on my brake hand, something I rarely did with the 11s, and rigged my Kong robot with slightly more friction when leading pitches I knew were free fall. I had no dramas pulling up when I needed rescue the ends from a tree branch.

All other members of the party were using traditional figure 8s and even our novice, Jodie with only a hand full of abseils under her belt, had no dramas controlling her descent on the biggest raps she has done to date.

Other than getting the ends tangled in some vegetation and having to sort it out half way down (could have happened to any rope) I was more than happy with how the rope felt and performed.

So far so good. I’ll do a longer term review on it later in the season to update how it’s performing and how it’s lasting.

Access: A nice walk up an old logging track beside a bubbling brook.

Navigation: Navigation is fairly straight forward if you stay on the trail

Time: Give yourself a few hours to enjoy it.

Petries gully is a pleasant stroll up an old logging track in the Wolgan Valley, just down stream of Newnes. We were lucky enough to catch it after a wet spell so the  cascades were in full display.

Getting there: From the main camp ground at the end of the road follow the trail down stream staying on the left (North) side of the Wolgan river.

You’ll pass the ruins of the old managers residence, which is worth a look around.

After about a kilometer you will come to a Y intersection at the bottom of a hill. The righthand trail is signposted “Pipeline Trail” go left instead and this will take you up Petries gully.

It’s fairly easy going and straight forward to begin. As you get higher the trail crosses the stream a few times and can be hard to follow as it’s overgrown and washed out the higher you go..

Return: Return the way you came. 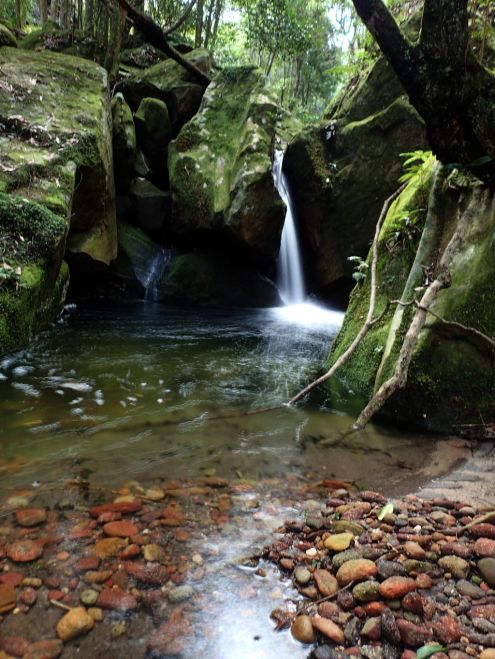 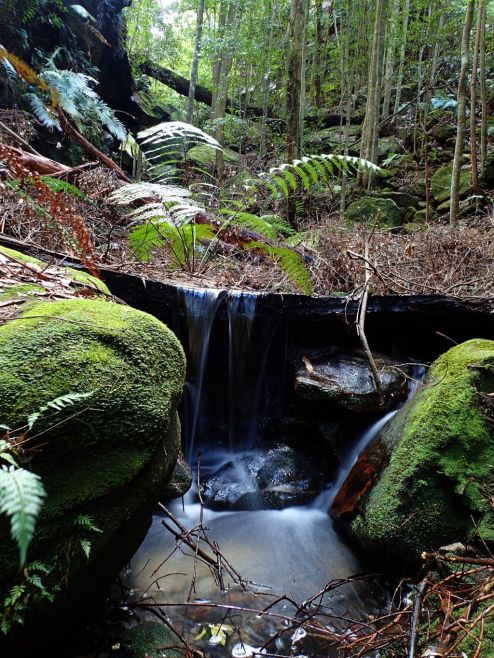 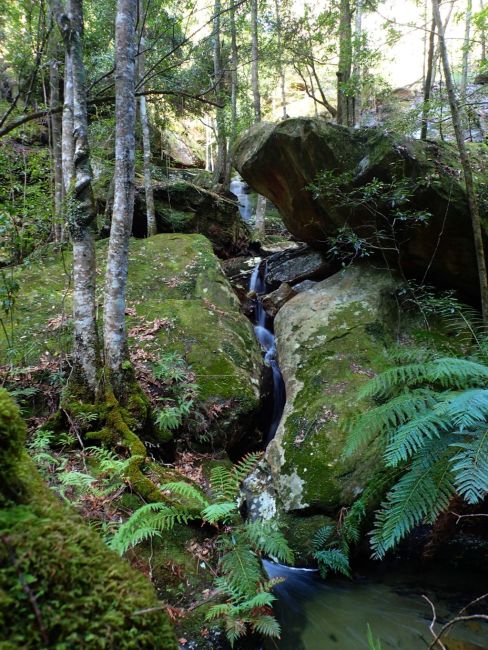 Jodie, Garry Edwin and me

Dione Dell is a good introduction to the Kanangra-Boyd style canyons. Unlike the dark, sandstone constrictions of Blue Mt canyons the ones out this way are more steep ravines that drop through a series of water falls as the streams cut down through the quartzite landscape.

Now at first glance quartzite looks a bit like sandstone, and once upon a time it was just that but then it got subjected to heat and pressure which melts down the granny structure and metamorphises it into and different beast.

Gone is the grittiness that offers some semblance of grip, and it’s harder too so tends to break off in lots of block sized chunks. Loose and slippery. It can make for hard going as you try to traverse it.

Anyhoo it had been ages since I’d been down Dione Dell (Almost 18 years) and I was keen to take Tal, he  and his mates had other ideas and went camping instead but I was still excited to show the others through it.

As I said earlier, it’s a good intro into Kanangra Walls canyons. One of the smaller trips out this way it consists of 4 major waterfalls, which are, for the most part, descended in single pitches, and a relatively easy walk out.

All that said it shouldn’t be taken lightly. The quartzite is slippy and loose and some of the abseils have quiet a bit of vegetation and in high water it would be a bit of a challenge.

In summer it is possible to take the direct route down through the falls. Today we opted to stay mostly dry (‘Cept for me who fell in. Pay back for the time I took Della down in the snow and he fell in multiple times)

But enough of my blabbering. here are some photos to wet your appetite. 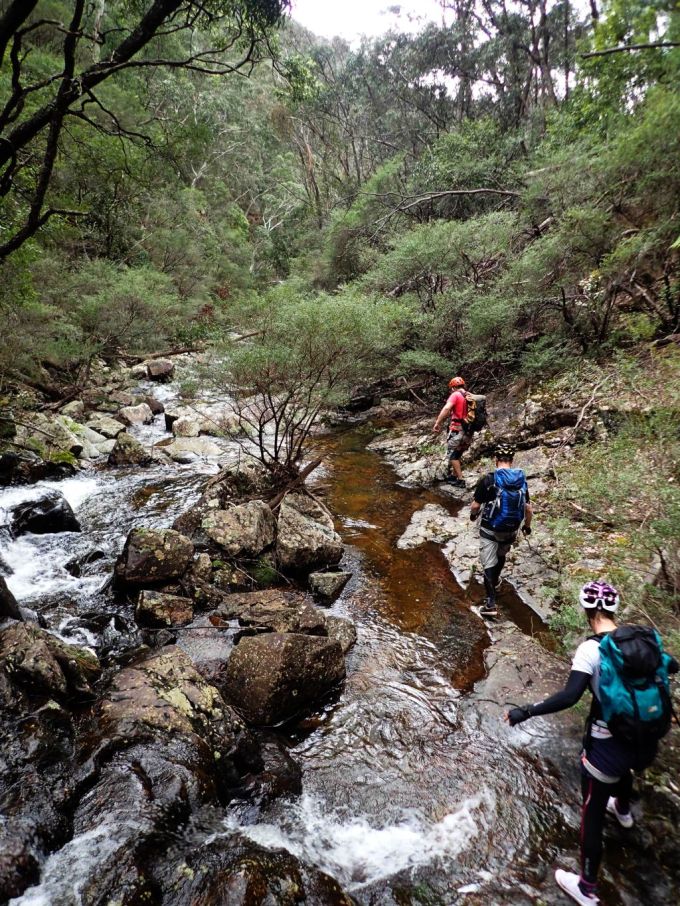 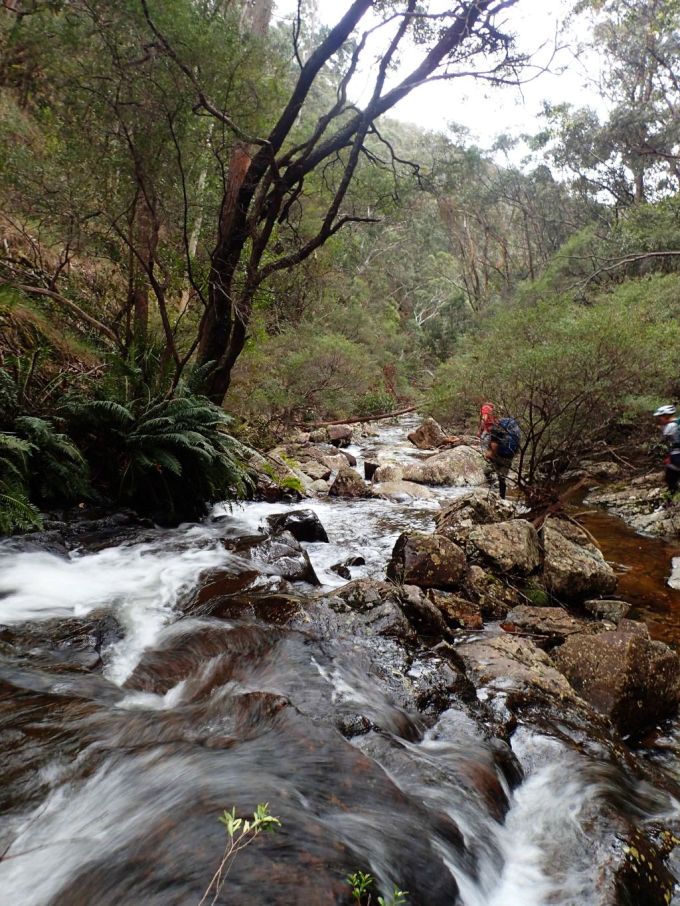 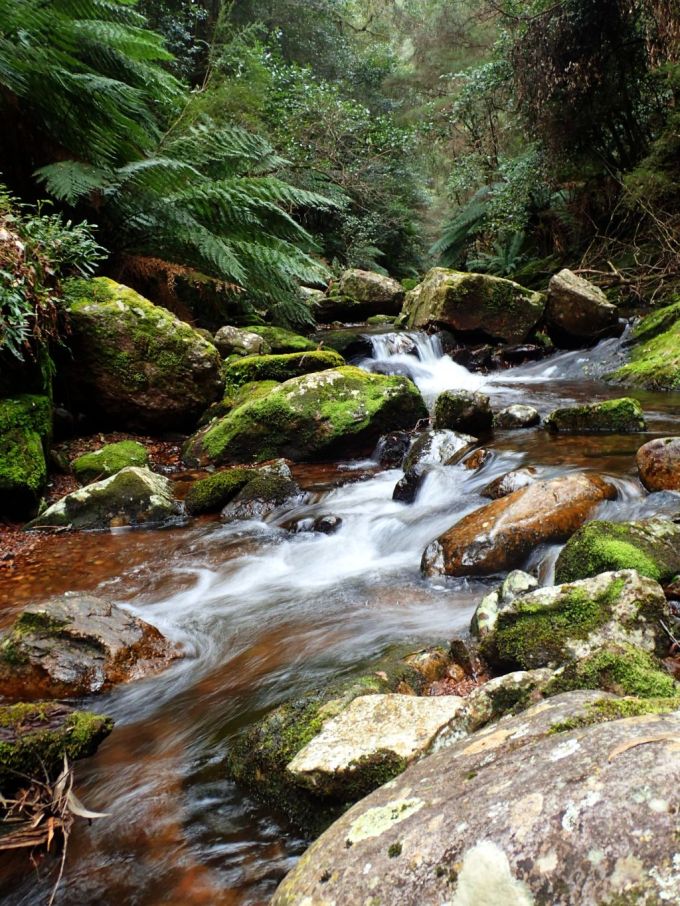 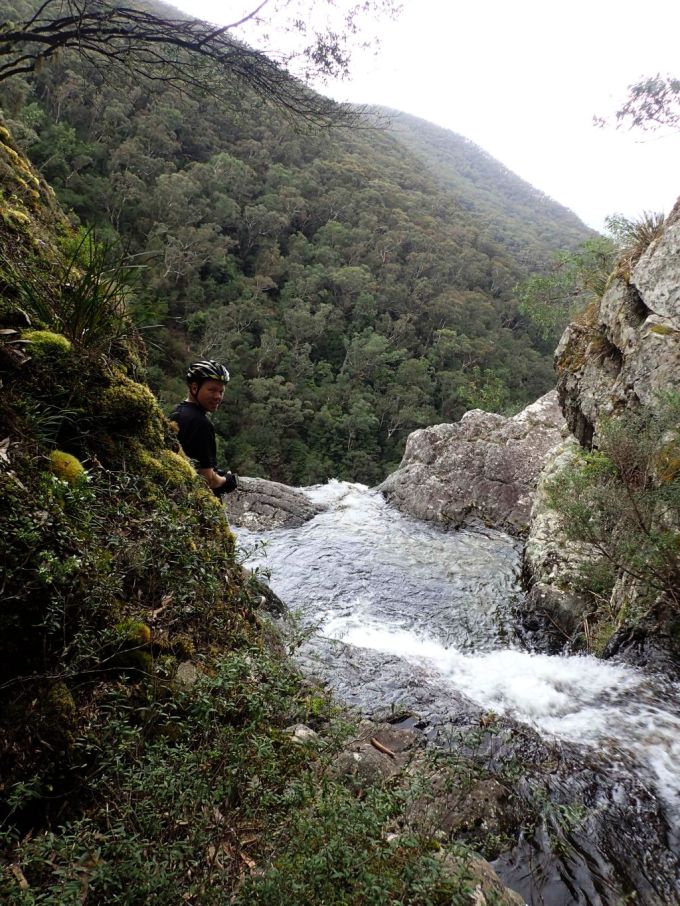 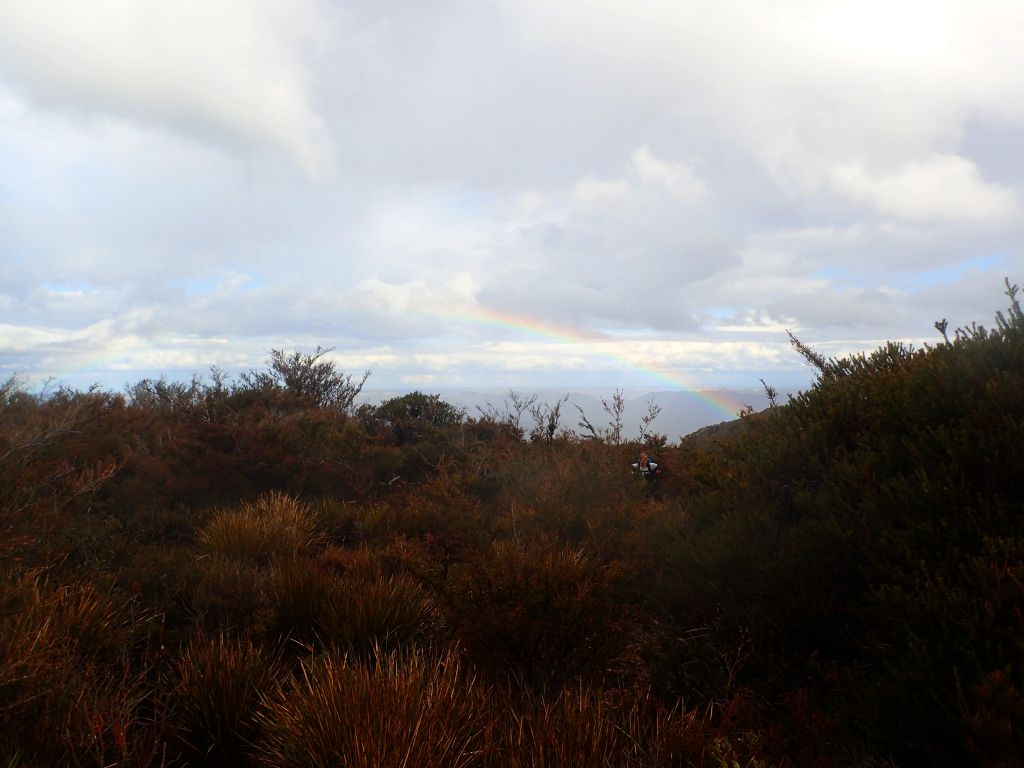 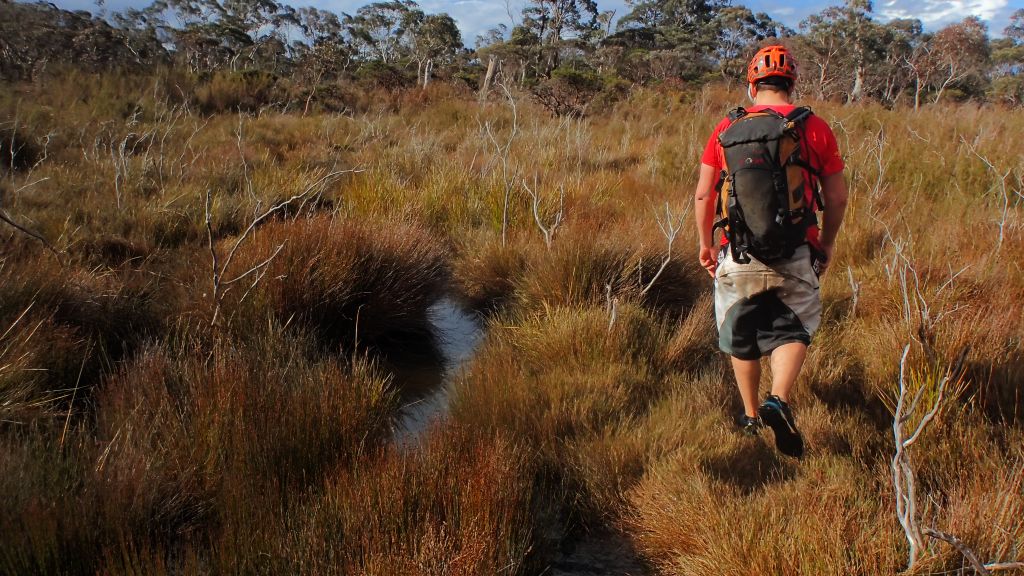 Time: About5 hr car to car with some photo phaffing