Bob told me about this one a while ago but I hadn’t managed to go for a look for it yet.

Apparently some time in the distant past they explored it, looking  in from the top, then finding their way to the bottom. They thought it was 2 abseils and dragged logs in for anchors. Only just past the second drop where they expected it to open out was a 3rd drop… with no anchor point. Lucky they had some kids with them and they lowered one down to drag some more logs up to jam between the canyon walls.

Anyhoo me and Tal had nothing on so we decided to go for a walk to see if we could find it. Bob had given me some good directions but I still managed to swerve a little to far right trying to avoid the worst of the scrub, still thinking I was on top of the ridge so not checking the compass we ended up on a little spur.

Back tracking we regain the main ridge. Thinking Tal would be hating me for the scrub I asked if he just wanted to head back to the car or continue on.

Continue on says he.

We work our way down into the little depression that would eventually become the canyon but skirt around the side of it to get a look in from the top.

The veiws from the end of the ridge were outstanding.

We enjoyed a bit of lunch on top of a fantastic pagoda. Bob tells me there is a colony of Broad-Headed snakes that frequent this area and we spend some time peering into crevices but have no luck in seeing any.

With a little look around we spie a likely route back up from the valley below then head off to check out the canyon.

We hadn’t really planned to drop in today, just a scouting mission but we had thrown the ropes in at the last minute just in chase.

The short canyon looked as awesome as Bob had described, an arcing slot that dropped steeply through the cliff line. But it sounded like there was a bit of flow over the falls.

we make our way back along the tops and find a way to scramble down just as the canyon begines to slot up. A short way in there’s a down climb to a short pool. Crystal clear, deep enough to jump into but freezing cold. We back track slightly to see if we could get past on leadges and drop in on the other side.

We make our way along a serries of thin ledges but the further we go the less options to set up an abseil. We do, however spy the top of the first drop. The trickle of water in the creek srpays out from the wall. We’d definately be getting wet. We hadn’t planned on that so we deside to stick with plan A and back track out.

Know I know the way in and what to expect it will be on the list to do at a later date. 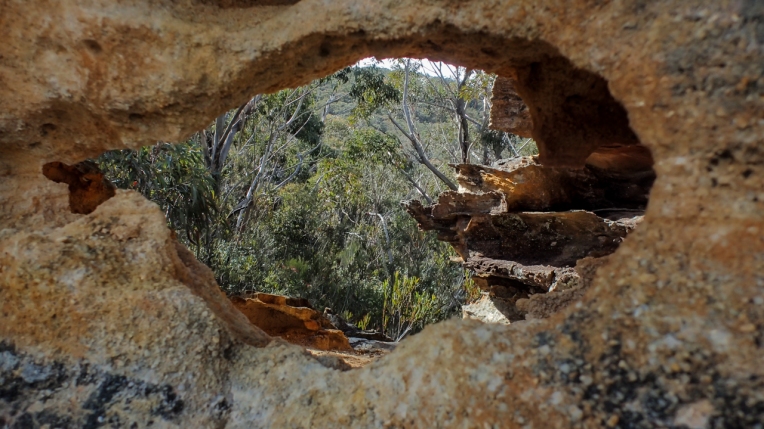 “You don’t have to sit outside in the dark. If, however, you want to look at the stars, you will find that darkness is necessary. But the stars neither require nor demand it.” –Annie Dillard