Mandy Tal and I

So as usual I had a bunch of different walks/canyons playing around in my head all week for possible bushwalk destinations for the weekend, there is so much out there to do.

Anyhoo I had a couple of goals firm up and then Thursday I happened to check the weather forecast, as you do…

Apparently there was this bloke building a boat and collecting animals 2 by 2 or something.

Up to 80mm of rain Saturday and 40mm Sunday. Strong winds, weather warnings to stay inside. There goes that idea.

If we get that much rain Goochs Crater might fill up, says I in an off handed comment

That would be awesome we should check it out Sunday, says Mandy.

So the rain sets in Friday night  but it doesn’t seem to be anything out of the ordinary. The Deluge hasn’t seemed to make it all the way in from the coast.

Sunday is damp, sure we’ve had more rain in 36hrs than we had all May but it doesn’t seem like it would be enough. Undeterred we pull out the wet weather gear, pile into the Triton and set off at the crack of noon.

The damp weather gave the bush a different kaleidoscope of colours

So I’ve seen photos of the crater looking like a secret mountain lake. I’ve seen video of people swimming in it. But, alas and alack, I’ve never seen it for myself. I’ve made the trek in after big storms but I get the feeling it drains as fast and it fills and you have tbe there as it is belting down to catch it with water over the top of the reeds

And it was not to be today 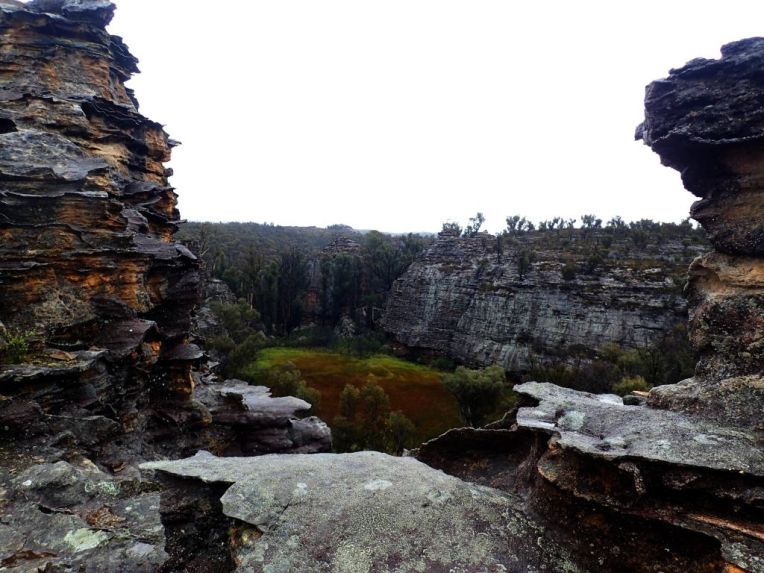 You could just make out a few patches of water just below the height of the reeds. No swimming in Goochs Lake today. If we get a heap more rain we might make the trek in one afternoon through the week and check it out again.

Anyhoo. Now we are here we might as well slip around for a look at the little canyon near by.

Billabong canyon is just tight drop into a nice canyony chamber then a scramble down into a second camber and that’s pretty much it. More a canyonette than a canyon and despite being fed by a long swamp just up stream of the slot it is usually pretty dry with just a trickle going through it.

Today it was pumping nicely. We hadn’t packed harnesses so slipped up over the top and approached it from the bottom 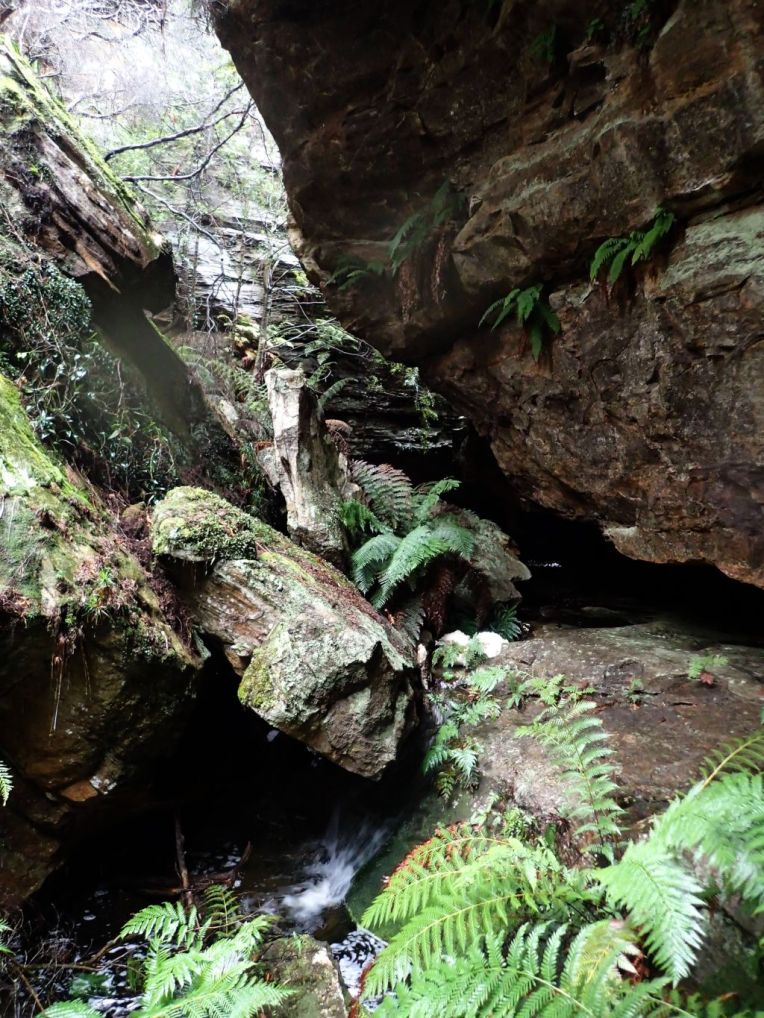 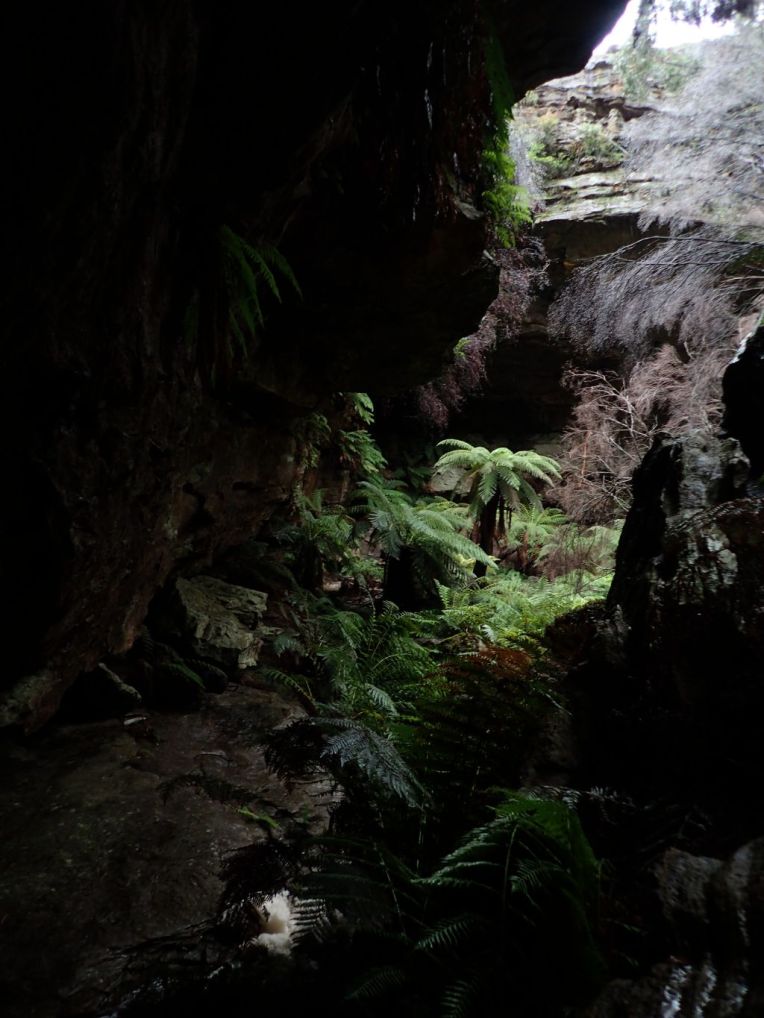 Mandy and Tal decided it wasn’t worth the effort to push up through the damp scrub so when I came to the usually dry bottom chamber and found a deep pool and a gushing rapid I decided to strip off and go for a swim to see if I could get into the upper chamber.

Was it cold? Well, lets just say I’m pretty sure my outy became and inny and I’m not talking bellybuttons. 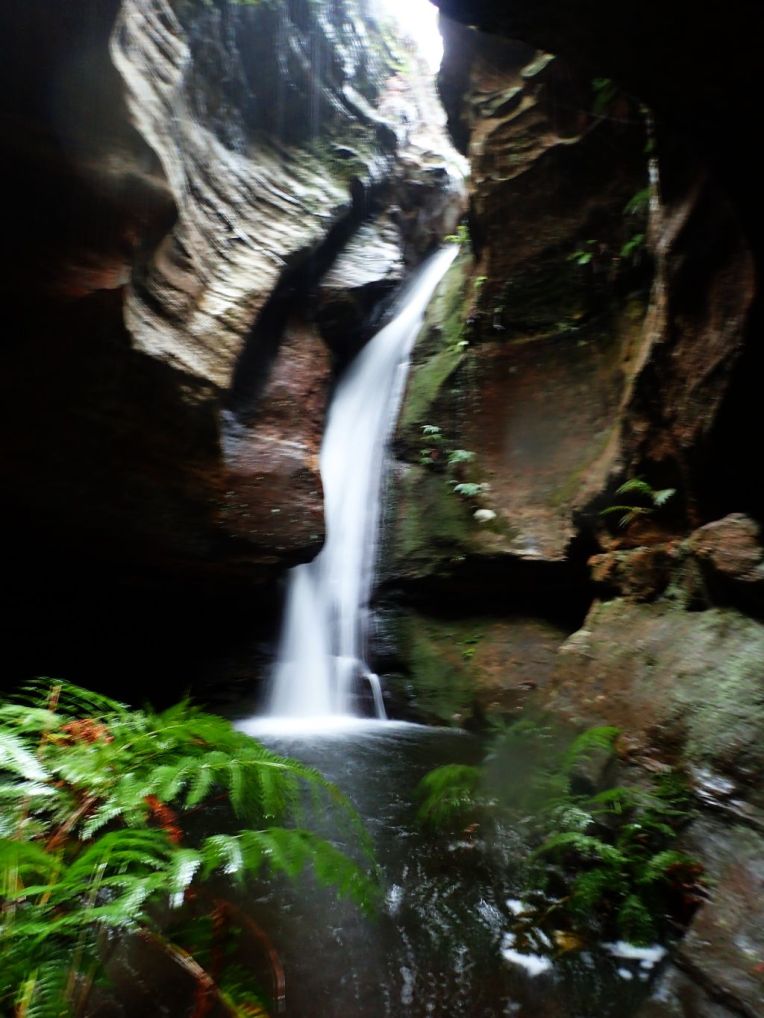 I didn’t stuff around too long, the air temp wasn’t too bad but the water was bloody freezing so I took a few snap shots, rueing that I left the tripod in Mandys pack, and made my way back down

So a weekend that looked to be shaping up as a no go for a bush walk turned up to be a great opportunity for adventure.

What’s that old saying? There’s no such thing as bad weather, just bad clothing…. and the right choice in destinations 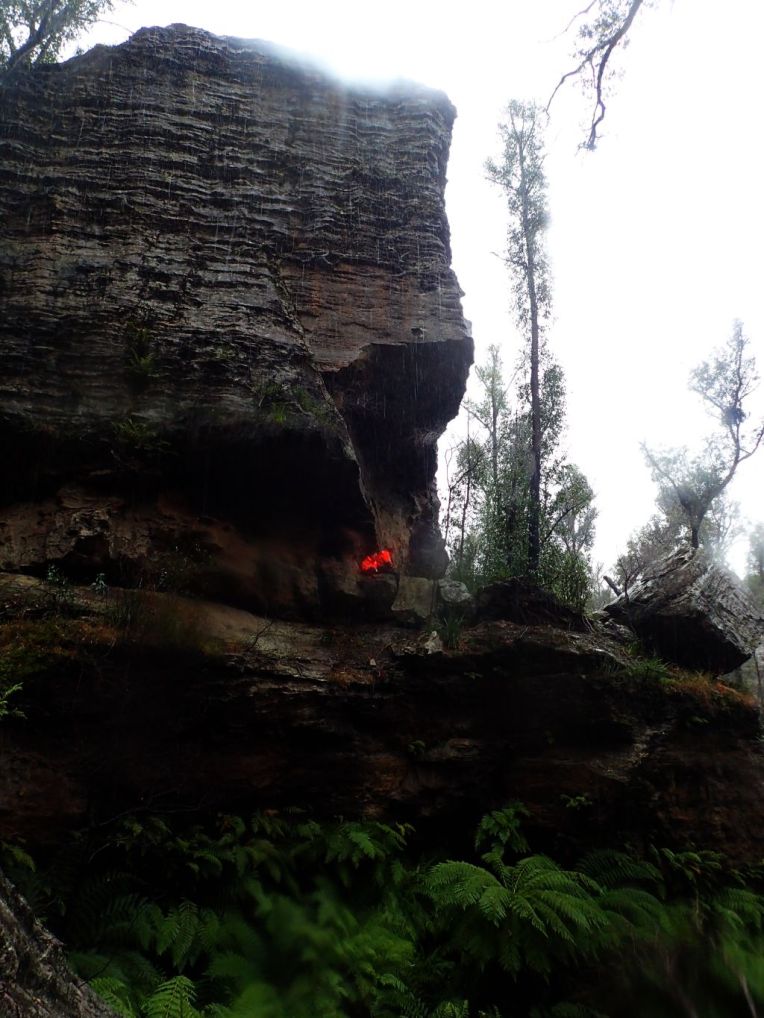 Timing 2 hrs car to car, lots of faffing about

3 thoughts on “Interesting weather for a bushwalk”