I jumped in on this trip last minute but, as always, Tim runs well organised and welcoming trips.

A lot of rain on Friday and a drizzlely morning had the Wolgan river up a little but the fog lifted and the sun broke through on our way up the pipeline track.

The views from the to were as stunning as always but we wasted no time in continuing on.

The short cut in is new to me. It misses the top section of canyon but takes you in via a small side canyon that meets Pipeline canyon just after the lower section closes in.

We arrive at our first abseil point. Do we put wetsuits on here? someone asks

You can if you want, says Tim. But we can do without

Will we know the spot to put them on down further?

Sure, just before you experience a sudden drop in temperature and an increase in wetness…

Tim should have taken his own advice, He and Al went through sans wetsuits. There was some cold bits…

I go forward and set the rope for the next drop which is done two stages. I descend the first then realise the rope isn’t lone enough for the second so I can up for the second rope to be tied on before continuing down

The spare ropes are thrown down and while the others make their way down I head down to set the next abseil.

I encounter a small drop just before the junction with the main canyon. It would be possible to down climb on tree roots but it’s slippery so I set the rope and drop in.

While waiting I decide it would be a good place to put my wetty on.

I hear voices from what sounds like above, sounds like someone is setting a rope. Shit maybe the rest of the group stayed out of the creek and are abseiling in to the main canyon from above. Not a problem except Tim likes to use single rope techniques in his group so my rope has a stopper knot at the top. I start thinking I’m going to have to climb back up to undo it…

The other thing Tim likes to use is walkytalkies. Two way communication in these situations is awesome. Crisis avoided, they are still making their way down the creek.

I still hear voices, not just in my head either.

Ducking around the corner I see another group coming in from the upper section.

The two groups arrive at the junction pretty much at the same time. How’s that for a slightly out of the way canyon early in the wet season?

Anyhoo they are a smaller group so we let them play through and then follow them down.

Pipeline canyon is a value for money experience. Lots of smallish abseils, some with tricky starts in a very pretty creek.

We catch back up to the other group at the top of the largest abseil and enjoy a bit of sunlight as we wait. 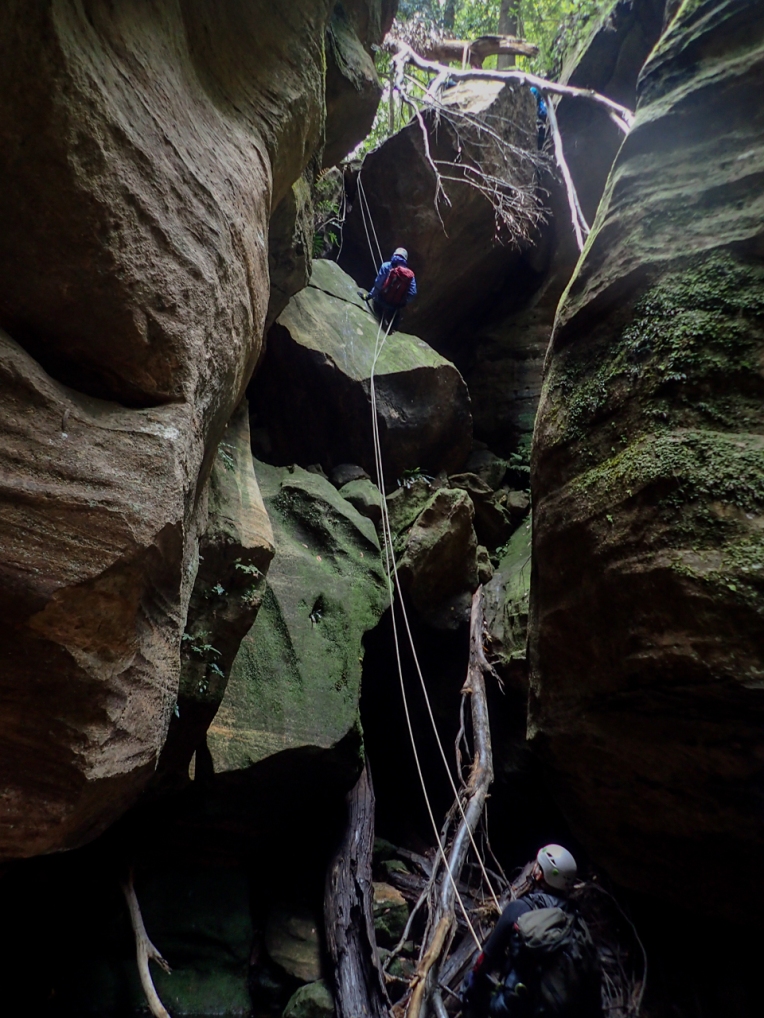 the next drop is just a few meters down stream.

You can stay dry be traversing a ledge on the left. Calls Tim

I drop down and begin heading left and promptly fall in. It’s a little brisk.

We scramble out into the sun shine. 1 Abseil to go.

Al decides to take the spare rope and rig up the next one.

I wait for the other but after a short stay in the sun am not too keen on swimming back across to belay.

Do you really want a belay?

I swim back across and climb up and wedge myself in above the water. It’s still cold..

I’m sure there was a bit of posing for photos as the rest of the crew come on down. Marchelle has a couple of ropes in her pack and as she swings under the water fall the extra weight has her go briefly upside down, giving her a bit of extra time in the cold embrace of the falls as she swings back and forth a few times.

Then every one is down and I pull and coil the rope, then have to jump in after it as my cold hand drop it into the pool… 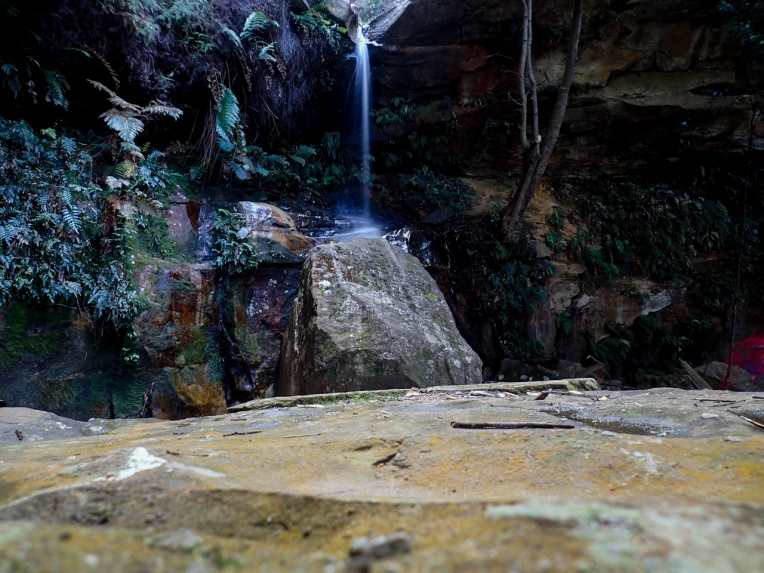 I can’t go away with you on a rock climbing weekend. What if something’s on TV and it’s never shown again: Smudge- Outdoor type