Sometimes I like to just go for a look to see what’s around the next corner. Curiousity tugs at me to veer off the usual path. That tends to annoy Mandy, especially when we are off track and in dence scrub, but in doing so I’ve come across some great features, sometimes not too far off popular trails.

Anyhoo, armed with rumours, vague recolections and no real idea I wanted to go for a bit of a wander around near the Pogoda track between glowworm tunnels and the old coach rd  and Geoff was keen to join me so off we went.

I’d picked out a couple of gullies on the satelite images that looks like they might be interesting. Gullies I’ve riden and walked past numourous times over the years but never ventured down.

It was a prefect Bluebird day with glorious sun shine yet not too hot an we made our way along the old rd before veering off into our first target.

Imediately we were greeted with relics from the fuel pipe line that pump feul refined from the shale works at Glen Davis, across to Newnes Juntion to be shipped out to who knows where.

Bridge for the pipe line made out of reclaimed rail tracks 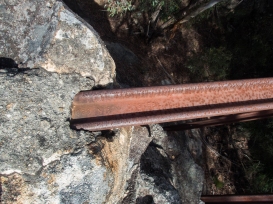 So confident were the owners of the Newnes shale works in it’s longevity that when the built the Wolgan Valley railway to service it they used double headed rail track known as bullhead. More expensive up front but as it worn down you simply flipped it over 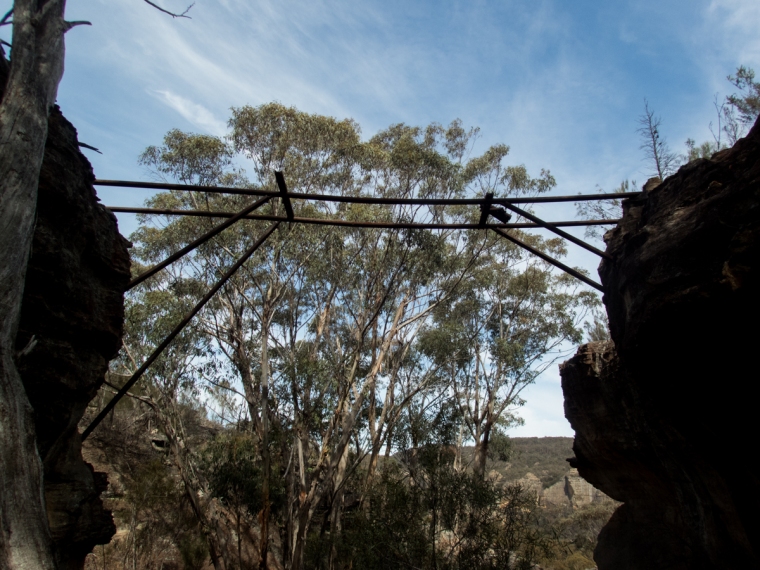 We admire the dry stone wall supporting the road above as we scramble our way down into the gully.

For our efforts we are greeted with some nice curved rock walls and plentiful thick scrub before our way was blocked by a drop into a short but dark slot. I’d bought a short rope believing we wouldn’t encounter anything too big out here. I was wrong.

Foiled we scramble out and make our way back up a ridge to the road.

The next gully I had earmarked was even less traversable and thus we  worked our way around to the start of the pogoda trail and then followed the base of clifflines around looking for things of interest.

A tactic that generally pays off one way or another.

We push on and just aroud the corner Geoff calls for morning tea. That rock up there will do. We scramble up and discover and long disused humpy

An old pallet bed made out of felled timber with some fence pailing nailed to it. most of the pailing long sine rotten

Remains of a wind break

When the railway was being built there was a thriving town nearby complete with a pub and post office. This seems a little too far away to be assciated with that but maybe someone wanted a bit of solitude away from the rowdiness of Greens camp.

With the things we were hoping to find seeming like a bit of a chimera we changed tack and scramble up on the cliff tops.

And so back up the coach road. A pleasant day for just having a look

Not all who wander are lost. Well I am. I’m often lost as shit and loving every minute of it