I’ve said before that for me the abseils are just a means to get to the next bit of canyon.

I’m far more excited by exploring the dark confines of a slot canyon. I’m captivated by the play of light as the sun arcs over head. I get fascinated by the way water and time have sculptured the rock, and I’m dazzled by the ferntacious greenery…

Ayhoo with that in mind the Kanangra canyons have never held a massive appeal to me but when Tim invited me on a trip down Kalang Falls I thought I may as well check it out to see what the fuss is all about.

After a week of drizzle mixed with rain we’d check the water levels and if it was too high we’d abort and do Dione Dell instead.

As it was it was pretty much prefect

And so our group of merry adventurers set off from the car park with a buzz of excitement and a swagger in our steps.

Despite a few of the others having done the trip before myself and Al got nominated leaders so the real leader, Tim could follow along at the back of the group as safety man with the spare rope. So we set  off to rig the first drop.

There is a bit of scrambling to get down to the first anchor and Tom’s notes warned the final drop before the anchor could be dangerous so in the wet slippery conditions we rigged the abseil from above it.

As with all of Tim’s trips we had multiple ropes and walkie-talkie communi-doonies so the group could spread out. Me and Al would set rope, the next person would arrive, we’d take their rope and descend to the next one. And so on and so forth etc etc etc. So even with a largish group taking their time on slick rock we made good time down the ravine.

Rope management was the theme of the day. Lots of vegetation and ledges for ropes to get tangled on. I can see where flaking it out of a rope bag would be handy on a trip like this.

I found the scrambles between the falls took a lot of concentration. The quartzite is a lot slipperier than the standard Bluies sandstone and also tends to have a lot more loose rocks ready to roll your ankle. 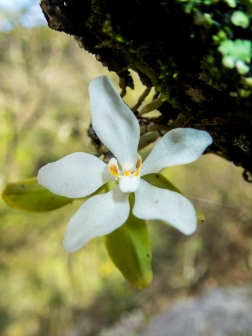 Probably really common, but can anyone tell me the species?

How did I find it? Well the waterfalls were stunning, the company was awesome, the abseils were abseils and the walk out wasn’t as hard as I thought it was going to be.

Another great day in the bush with great people.

The mind is like water: capable of going anywhere but once hemmed in by walls of it’s own making it takes a powerfull flood to burst it’s banks and change its course: me

Time: 9hr 20min car to car, not rushing in the slippery conditions and taking it easy up the exit ridge.

One thought on “Kalang Falls”