Madie, Wouter, Meeee with a cameo from Jen

So with a bunch of other commitments I didn’t get out canyoning at all in August. In fact the last real canyon trip I lead was almost 2 months ago so I was frothing to get out.

I was keen for a couple of the Pagoda canyons on the Plateau before the weather warmed up and when Madie said she had the weekend off I thought why not combine a few of the smaller ones to make it worth her drive.

I also thought she’d might be nutty enough to join me for our first wet canyon of Spring.

Can I bring a friend, asks she.

Yep says I. And so Wouter, would be joining us for his first canyoning experience.

Jen had a morning free opted in for the first canyon too.

After a long dry spell a week of steady drizzle was welcomed by all and certainly made the first two usually dry canyons a bit more special.

The first recorded group through here called it Acoustic Canyon due to a series of these chambers. But as there was another little canyon out in the Nayook system already called Acoustic this one is now normally just called Sunnyside, though the Jameison guide also lists it as Wombat.

Back to the car we say goodbye to Jen and make our way to the next one.

So do you guys want to slip over and check out the tops or make a dash for time and go and get wet in another canyon? Asks me

Why can’t we do both, replies Madie in her best el Paso impersonation.

Then it’s back up the ridge, into the car for a longish drive around to our next stop. I have to say I was a bit excited for this one. Madie was so excited she wetsuited up while we were driving. I’m not sure Wouter knew what to make of it all.

We made the car park at a bit after 3. Starting a canyon, a wet canyon so late on a cool, wet, early spring  day would normally not be sensible. But this one is super short, we managed to go car to car in just over an hour which is nuts.

But it is nice as a side trip on the way home.

So are we going to abseil down beside a waterfall? Asks Wouter on the way in

Um not exactly, says I

After a long dry then a week of drizzle I wasn’t sure what to expect but as we short-cutted over the ridge we could here the falls roaring and as they came into veiw it looked just right.

It’s a cracker of a abseil 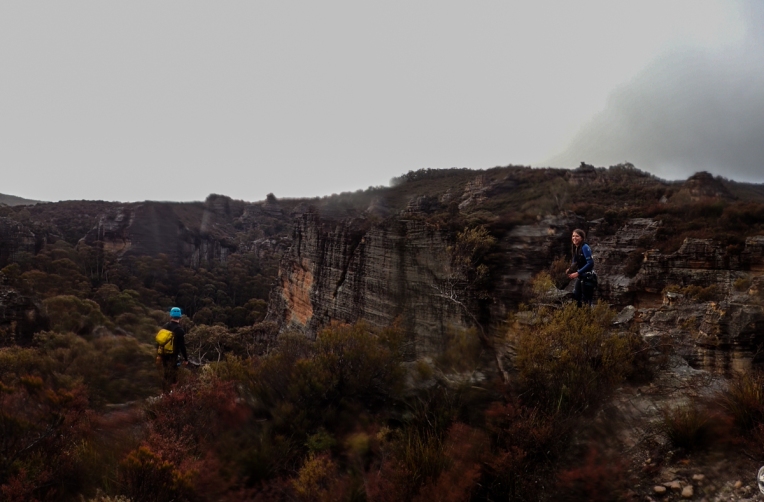 All in all another great day in the bush

Millions long for immortality who don’t know what to do with themselves on a rainy Sunday afternoon.

Party Size. 4 for Sunnyside/acoustic. 3 for Zorro and Alcatraz

Timing: I think it was about 2hrs car to car for Sunnyside (with a bit extra walking along the firetrail due to trees down). a fraction under 2hr for Zorro and 1hr for Alcatraz with a bit of time driving between the lot