Mandy, Tal, Edwin and I

So, there’s this spot in Minnesota where the Brule River forks just above lake Superior. The left fork tumbles over the cliff line in a nice but normal waterfall and continues on its way to the lake below. The right fork, however, plunges in to a dark hole called the Devils Kettle and for all intents and purposes is never, ever, ever getting back to… I mean, seen again.

Apparently people have thrown all sorts of stuff in there, ping pong balls, coloured dyes, old cars… it just disappears.

And there is another spot in the USA that had a prison on it that was apparently very hard to break out of.

This is like both of those put together. But not so much.

I have memories of cycling out to this area on old klunkers from a school camp in the 80s. The same one we later rode out to deep pass on. We rode out here to be amazed at the cliff lines then a few of us scrambled down the hill with our guide to wonder at the water fall running in “solid” rock.

I’d pretty much forgotten about it. Even hearing stories of Alcatraz canyon I never put 2 and 2 together until my neighbor, the infamous Bob Taylor posted some photos on his facebook page. Right, put that on the list for next year.

Except last week hiking out of Acoustic I found myself working up a sweat in the warm sunshine and I start to think, we use to canyon through to May. I’m sure we could fit in another wet one.

And so plans were hatched.

Information was hard to come by. I could sort of remember how to get to the top but I couldn’t remember how we got down, and more importantly back up, through the cliff line. A few inquiries reveled not much more than I knew already so we decided to just suck it and see.

I’m not sure if this is a canyon trip or just an abseil into a very interesting feature. I’m even less sure if  any of that even maters.

The walk in reveals the stunning cliff lines I remember. It’s great as you skirt along the top of the ravine you are just about to drop into.

It gives a great perspective over the special waterfall. I’d show you a photo but despite having both dry bags and hard case handy I left my phone and it’s $5 “waterproof” case in my pocket as I slid into a pool I was expecting to be knee deep… Um, yeah.  If it drys out I’ll post the photos later. The ones I have now are off my go pro.

Anyhoo, after marveling at the lack of crowds we encountered all summer in the popular canyons we were bemused to see another party doing this obscure one right at the end of the season at roughly the same time as us. We got to see them come out of the hole as we negotiated around the cliff top on our way in.

We follow their foot steps down and reach the canyon in short order. And short is what it is. A small gap between impressive pagodas and a plunge down a corkscrew into a chamber that there appears to be no way out of.

Ed, who opted to forgo the wetsuit, got busy setting the ropes snapping photos as we suited up.

I was nervous and excited as I roped up and went first. It really is an awe inspiring slot. Down through a slight twist and turn and then you look down into a deep shaft. Still there looks to be no way out. Down through the waterfall. It’s my new favorite drop. (They all are)

Once down you can see the spot where the water finally found a weaker clay(?) band and ate is way out of the hole. It would have been an impressive feature way back before the water worked this way out, now it is simply stunning.

Many photos were snapped.

It was not long after this where I baptized  my phone.

Next was finding a way backup. We follow the cliff line around for a while and find some evidence of former use 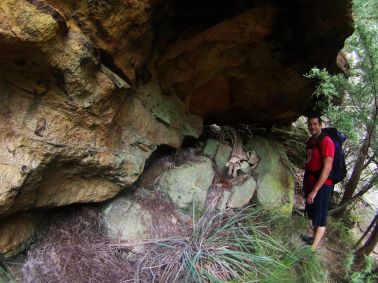 I’m pretty sure old John Browning ran abseil, climbing and survival camps in the area and would be confident these are his doing. He was old school, had rope burn scars from using around the arms abseil techniques on hemp rope from his army days. Top old bloke, RIP.

Anyhoo. We were soon back at the top admiring the views again. Home to home in about 3hrs, and Mandy was worried we wouldn’t find our way out and she’d miss netball…