Julie, Lyn, Jim and I

So I always thought it odd there were some great canyons running off the Blue Mts Plateau on the North side of the Highway but not much to the South. Sure there was Empress, which is stunning, but I thought it an oddity in among the micro canyons, steep cracks and more open V-gullys running into the valleys on the south side.

Awhile ago I heard rumours that something else had been found but was vague on details. Then the 5th edition Jamieson guide came out with a brief description of the awesomely named “Great Uncle George” Canyon and I’ve been keen to check it out but just hadn’t gotten around to it.

Hey Julie, texts I, U off on ANZAC day? though my spelling and typing is even worse on text.

Sure am, says she or something to that effect and we hatch a plan to visit Old Uncle Georgeyboy. She contacts Jim who pioneered a different exit up an easy ridge back to Ingar Fire trail which makes a very short car shuffle or negates the need for one altogether if you don’t mind a bit of boring fire trail walking at the end.

Jim and his wife Lyn are keen to come along, even better.

Ed can’t make it as he is busy doing family stuff, which is a bummer. As I know he was keen to check it out too.

Tal was keen but when I woke him up at the crack of 7:45am he groaned, rolled over and pulled his covers over his head… Um OK. Julie shows up we stash gear and head up to meet the Cooks at the car park.

It’s a short walk in… if you veer through the private property but it may be best to skirt around the outside, avoiding the swamp and neighboring gully. Up top it’s a bit of an erosion scar. A trail dozed down towards the cliff edge must surely be an old fire break as it’s too steep for a standard 4WD.

Anyhoo we reach the abseil point. Jim set up on the rope, backs up and with a little hop disappears. It’s funny to watch. One second he is there, there next he is not. Hopefully I can get some video together over the next week or so as I have a good clip of Lyn doing the same.

A nice overhung abseil into a awesome amphitheater. A tall waterfall plunges into a sited up hole which must once have been a very pleasant swimming hole.

A set of stairs lead back up the through the cliff line and while the rope is getting retrieved I fire off a couple of photos and head up the stairs to see where they go. A lot of work had gone into making the stairs and the trail above them. It takes me up to a little cave where more stairs are carved up the rock face to no where, as the trail continues around a nose and up above the top cliff line.

A Lot of work went into this track 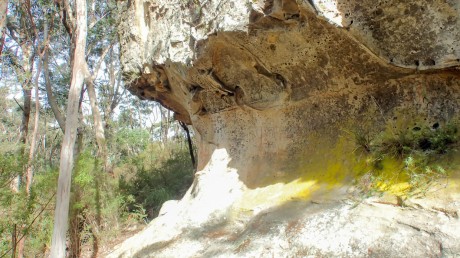 Odd place for a step

What followed was a pleasant stroll down a very pretty creek inter-spaced with some abseils and some nice canyon sections.

More pleasant creek follows. It was mostly easy walking with a little bit of boulder hoping

Starting to Canyon up 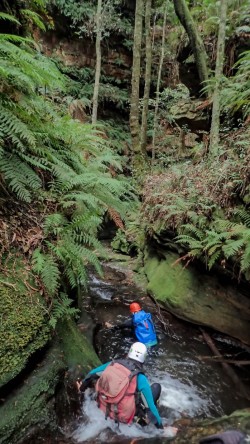 Some boulder scrambling and wades

Several times the canyon threatens to form, swings around a corner and peters out 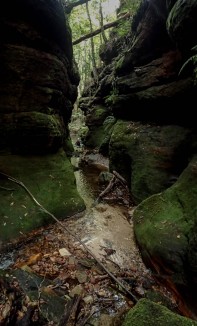 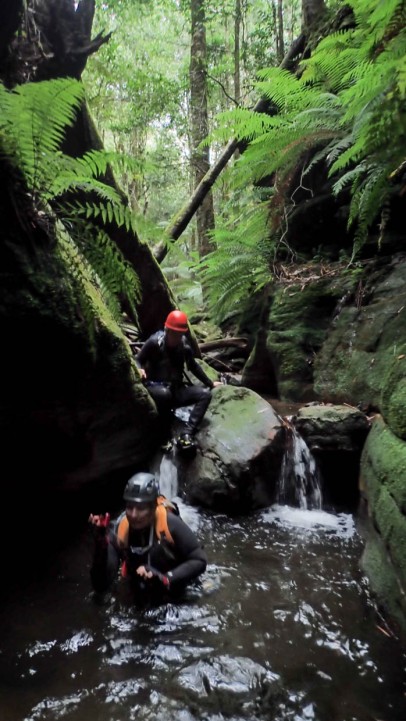 It opens out briefly 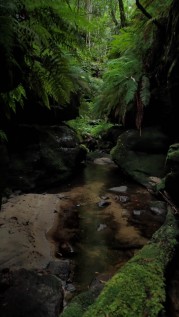 Canyon formation opening back out

The Jameison guide says to continue down stream a while then out another creek, which requires a car shuttle but Jim had scoped another option last trip and we scramble up a break in the clifflines which leads to an easy ridge back toward the picnic area near the start of Ingar fire trail and thus back to the car.

So, while I wouldn’t say the canyon itself was overly spectacular it was a very nice trip  in a beautiful creek that was, for the most part, very easy going. While a couple of the abseils had tricky starts they were all a bit of fun.

Timing: 5hrs car to car with lots of photo phaffing, exploring, chatting and taking it easy )

We were trying to figure out why these stair would be carved under the cave, its certainly easy enough to walk up the slope beside them then Mandy cottoned on to a likely answer, could they have quarried blocks from here to use int he stair case below?