I thought every one else was out of action, Garry  busy studying, Meggs saving himself for a moto trip, Edwin away, so I suggested to Tal we do a little trip through Empress/Valley of the Waters canyon and then have a look at Fortress Canyon

Back when Mandy and I were first into canyoning we had avoided the popular ones up the mountains. We did do Empress (and Grand) but causally dismissed them and others as nice but too touresty.

When the kids came along Mandy stopped canyoning and so I did a bit of guide work just to keep getting out there.

Easy access meant Empress and Grand canyons were the mainstay beginner trips. You’d teach a group to abseil then do either or both. I did them many times and in doing so they lost a bit of appeal. Last year I did The Grand Canyon at Blackheath for the first time in about 15 years and it reminded me how awesome it was. They are touresty for a reason.

With this in mind I was keen to take Tal through Empress, and as I had never done Fortress it seemed like a logical inclusion.

Mandy said she might be keen to come for the Empress leg with us. Sweet.

I sent the polite text around on the off chance the others were available. Surprise, they all were. Even Sweeter. The Plan was hatched.

The mountains had copped 150mm of rain early the week, which was a concern. If the catchment is waterlogged even a light rain can see water level rise rapidly in a canyon. But  the rain had come after a dry spell and a reccie showed water levels normal and soil still dry below the damp top 10mm. So we’d keep an eye on the weather radar but otherwise game on.

Then Edwin rolled his ankle and wouldn’t be coming. Ben and Mandy pulled out at the last minuet. Gaz asked if Jodie could come, he’d given her some abseil practice the day before. Yep no worries, if she wasn’t confident Empress can be reversed without doing the abseil.

So it was Tal, Meggs, Gaz, Jodie, Bryson and me.

As stated earlier, Empress canyon is popular with commercial tour groups and gets so busy NPs have installed a log book so groups can better space themselves out to avoid a cold wait for the abseil.

We got there early enough to avoid the commercial parties, 8am. one party was abseiling out as we were walking in but the log book was clear.

Empress is short, easy to get to and from but it is a very nice canyon. There are some deep, relatively dark sections and some lush more open sections. You can see why it’s popular with the guide companies. 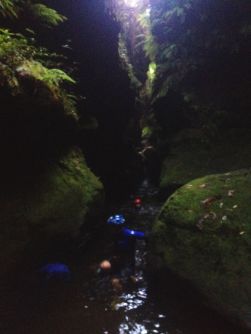 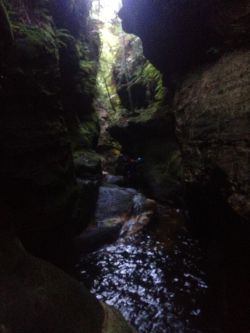 It’s a 30min high light capped off with a stunning 30m drop down Empress falls. Unfortunately with Edwin out we didn’t have a 60m rope so we’d have to be content with the shorter 20m abseil down the side of the falls to a ledge above the main pool, probably the better option for Jodie’s first serious abseil. 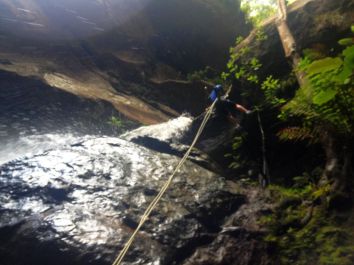 While the over hanging start can be a little intimidating for beginners it is a fairly simple rap down to the slippery exit ledge. Every one was beaming at the bottom.

A bit of time was spent swimming in the pool and jumping off ledges before packing up the suits and heading back to the car. Another party were setting up on the abseil as we hiked up the stairs to get back to the car at around 10am.

A quick drive back to Leura and out to Fortress Ridge. There were a few cars at the clearing that acts as a car park, mostly walkers and joggers by the looks. A couple of canyoners heading in just in front of us.

The walk in was fairly uneventful. Nice views from the ridge top then a steep stroll down to the creek on a fairly well defined trail.

We suited up straight way but left the harnesses for later. Somehow the couple who were in front of us reached this point just behind us. I was going to offer to let them go in front as we were the bigger thus, presumably, the slower moving party but they were still faffing about while we were set to go so we moved off thinking they’d leap frog us. It was a bit of a worry that even after spending a bit of time at the end having lunch with the view they never caught up to us.

Anyhoo. The descriptions said Fortress had 3 canyon sections separated by some creek walking. 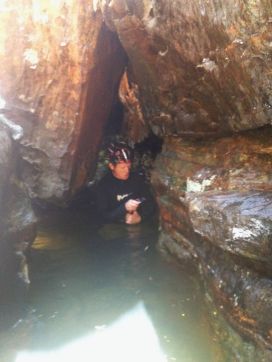 I scrambled down a tricky little drop in the first section, it wasn’t all that deep and had some rocks to avoid but with a bit of guidance the rest of the party jumped without incident. Water temp was pleasant, warmer than Empress though it may have become chilly without wet suits.

The standard check out the yabby shot. 3 mesial carpal spines and slightly less spikey tail identified these as Sydney crayish (E. Australasiensis) and there were a few smaller ones. The single discarded arm/claw we saw in Empress had the 2 spines of Giant Spiny Crayfish (E. Spinifer)

A bit more creek walking, boulder scrambling brought us to the 3rd section and a little abseil of 6 meters or so. Bryson and Tal were keen to jump it. I rapped down to check the water depth, its a little bit of an awkward start but no too complicated.

There were some rocky ledges immediately under the fall which were only waist deep. It was deeper further out so it might be able to be jumped but we decided not to risk it today. 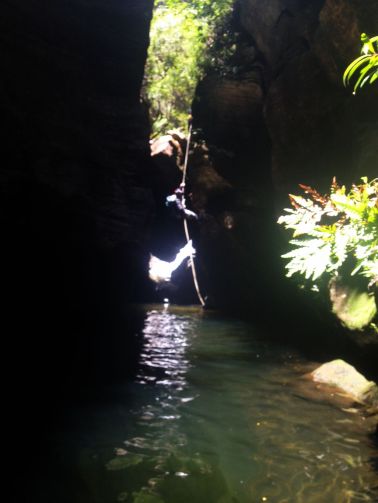 Another pleasant constriction follows. It’s nice I was starting to think of it as some where between the wider float through canyons like Wollengambe and the tighter deeper canyons elsewhere. It was pretty, just not blow-your-mind-stunning, then after another short boulder hop it reveled it’s wow factor.

The canyon opened up and Fortress creek gently trickled its way over the 70m cliff line into Govetts Gorge with stunning views over Lockley Pylon, the Grose Valley and the Blue Gum forest with Mt Banks in the back ground on the far side of the Valley.

A couple of small pools right near the edge let you sit and soak in the ambiance.

It was a great place to grab a bite to eat.

It was still early when we got to the falls, just past 1pm. Not knowing how long the trip would take and wanting to start Empress early had the adverse effect of having us face the hike out in the heat of the day. After a cold week the weather decided to play summer and the temps climbed to around 31. We faffed about for a fair while before setting off.

The hike out starts steep. You gain a lot of elevation really quickly but there are plenty of spots to stop and take in the views and the views just keep getting better.

You gain the ridge top fairly quickly and from there its an easy stroll back along Fortress ridge.

There were 7 or 8 other cars in the clearing when we got back. 2 young joggers gave us a friendly hello as they got back around the same time, jumped in their car and left. Once again, despite the popularity we didn’t encounter anyone else while in the canyons. I was a little surprised by this.

I may need to do some maintenance to my pack (It is 20yr and has been dragged down a lot of canyon. Mtn Summit awesomeness) as my shoulders were a bit sore after this one and I got as little sun burnt on the ridge. Otherwise all in all an enjoyable day.

Fortress about 5hrs car to car with a relaxed lunch. Aprox 9km round trip (my garmin showed 6, though I stuffed up again and didn’t set it until we reached the crk. Gazs showed 16 but has some  error points in the canyon that wanted to jump across the valley)