I’ve heard a lot about Hat Hill canyon, though back in the day it was Blackheath’s sewage outlet which had always put me off doing it. But in 2008 Mt Vic and Blackheath became the last 2 Blue mtns towns to benefit from treatment plant upgrades to hook them into the main line to take their flushing elsewhere and it has been recovering ever since.

So with me and Tal keen to do something and Mandy regretting pulling out of the Empress/Fortress trip we thought it about time we checked it out. Rob and Judy decided to come along too.

The weather wasn’t the best. Big storms has rolled through Thursday and Friday afternoon dumping a metric shiteload of water from the sky. Is it safe after all this rain, asks Rob.

Don’t know, says I. Never done it but it looks like a short walk in so we can play it by ear. If it looks nasty at least we’ll have a nice walk there and back.

Weather forecast for midday storms had us decide to delay til Sunday.

Sunday was drizzly but no storms on the radar. Weather got worse as we headed up Mt vic and into the low lying cloud that mountain folk like to refer to as Mountain Mist. To everyone else it’s fog but let’s not ruin the romance.

Temps were ideal for a walk.

We got to the car park at around 9:30 and there were several cars there. It also services a climbing crag so it was still unsure whether we were the only ones silly enough to be heading down the slot in this weather.

The walk in was short an uneventful. The track is vague in places which surprised me a little. Hat Hill is very close to town and all reports were that it was a very pretty canyon with no abseils so I expected it to be more traveled.

Reaching the creek the water levels didn’t seem overly high so we suited up and continued down.

The creek soon disappeared down an awesome looking hole which signaled the downclimb into the first section. Mandy had read this would be very difficult in high water but, again the water level wasn’t that bad so we bit the bullet and scrambled in.

OK so every one raves about the lower of the 3 constrictions but I have to say the top 2 sections, thou short, were very nice. If the first section was 3 times longer it would be the pick and I think I enjoyed the 2nd section more than the 3rd. That may have been due to water being up a bit.

Elephant in the room time? The water quality post sewer rerouting… Today the water had a bit of a brownish tinge which may just have been due to the excess rain run off down a gully that was still fire affected from the 2013 blaze but every now and again it was a little hydrogen sulfide pongy. I think the thought that it still might get a bit of over flow from the plant put Judy off a little, certainly had me ensuring I had my mouth closed on the swims. Rob, who has a background in water treatment said the  really bright (yet somehow darker) green moss sometimes seen on semisubmerged rocks was typical of that found in “high nutrient” streams and the side streams trickling in certainly seemed a lot clearer……

On the plus side I think its on par with Bowen Crk for lush greenness. 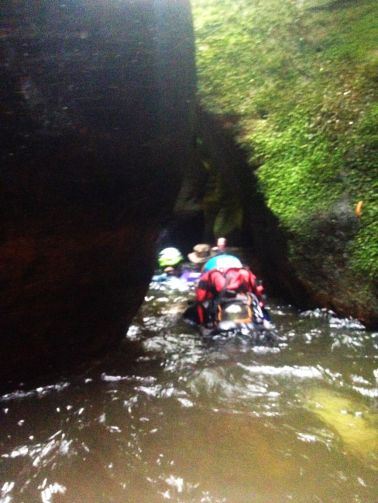 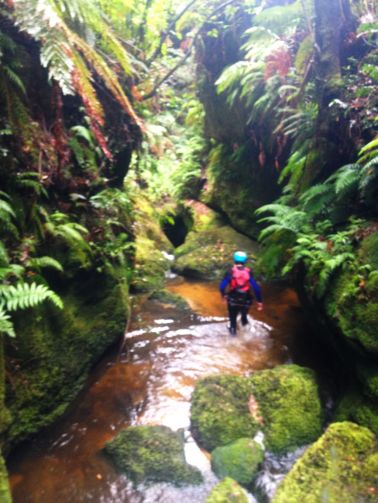 Second section soon arrived with an easy scramble down into the constriction. As I said this was probably my favourite bit. Don’t get me wrong the lower constriction is very pretty, deeper and longer but for some reason the top two just seemed to have a bit more WOW going in. its a pity they are not end to end. 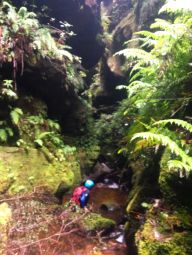 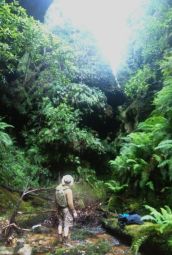 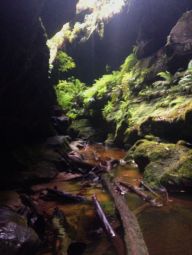 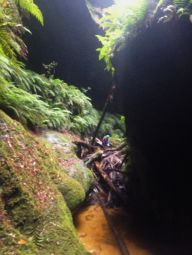 A bit of creek walking followed and I slipped up the big left hand tributary for a bit of a look while waiting for the girls to catch up. Quiet interesting.

Further down we spotted our exit gully and continued past it to the 3rd section.

It was about this stage that I realised that the snack pack I put in Mandy’s bag hadn’t made it into the dry bags… At least the muesli bars should be ok in their wrappers.

The third section is deep and more sustained. The several pretty waterfalls trickled down the towering canyon walls. It’s nice for a non-abseil canyon but I think Tal was a little disappointed in the lack of jumps and technical stuff and I have to say I was a little too.

The 3rd section opened out and we grabbed a bite to eat. While the girls chilled out us manly-men slipped around the corner and up the tributary to the right which is highly recommended.

A short way up you are stopped by an waterfall running down through a double archway. It’s almost a triple arch as higher up the creek runs under a chock stone then down through a large hole and in though a smaller hole. It is really pretty.

Once again we hadn’t encountered any one in the canyon, though there were fresh foot prints in front of us on the sandy beaches. The exit gully was obvious though the trail out once you neared the top wasn’t and we lost it a few times. No dramas as you just head to the top of the ridge and eventually we interested the main trail that runs out to the end of the ridge.

Once again we had ascended into the “Mountain mist” but, despite not getting the views, it was a pleasant stroll back to the rd and hence back to the car. 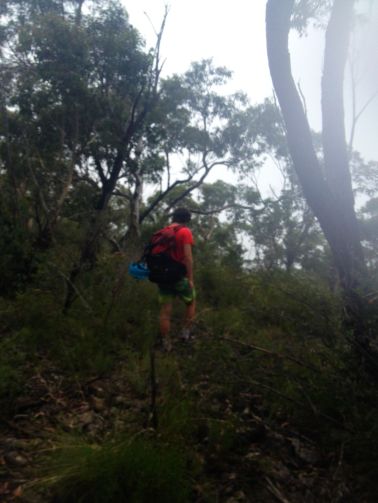 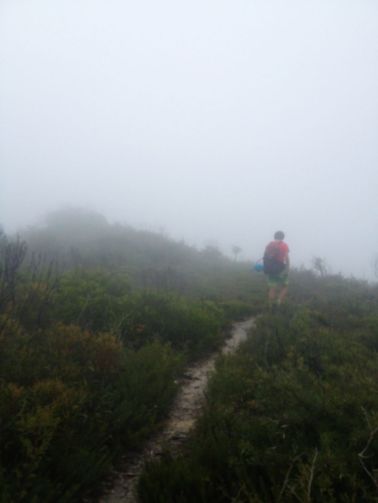 walking along the road we were past by a convoy of rescue teams going out and some coming in. Unfortunately they seem to have spent their day out looking, without luck, for someone suspected of jumping off the end of Perry’s lookdown. With a few more days of wet predicted I hope they all stay safe and find their man.