The big basalt cap of Mt Banks is one of the most recongnisable features in the Blue Mts .

In 1804, when George Caley attempted to cross the mountains he gazed out from the Paramatter plains and declared there wasn’t a single peak that would take more than half a day to scale. Mt Banks was one of the peeks he had noted and set out to concur. His goal had been first Mt Tomah then across what seemed an easy saddle to Mt Banks and on to Hat Hill. Of course that “saddle” between Tomah and Banks is cut by a maze of canyons that are still serious undertaking for modern canyoners with all the right gear and maps.

After spending the night in “Dismal Dingle” being threatened with mutiny by his convict assistants he beat his way back up to the ridge line, and approached  Banks from further around.

From the top of Mt Banks he was struck with awe and dismay. The mighty cliffs of the Grose valley barred his way to Hat Hill, the next peak he had as a destination. Forcing him to hang his head and admit defeat. Little did he know that if he had went straight past Mt Banks and stuck to the ridge line he would have found his way to Lithgow, a day or so walk away. A route which would later be “found” by Bell as an alternative to the GWH.

Access: A nice walk along a fire trail.  A section of dirt to the parking area though it is generally well maintained

Navigation: Navigation is fairly straight forward though the trail can be a little vague further out

The walk from the picnic ground around the summit of Mt Banks itself to Frank Hurley Head is an easy stroll along a fire trail that brings you to views of grandour surpassing just about anything else in the mountains.

Frank Hurley was a photographer and film maker who based himself out of Lithgow for many years and has been described as the photographer who changed history. The view from his name sake is a worthy memorial to him. 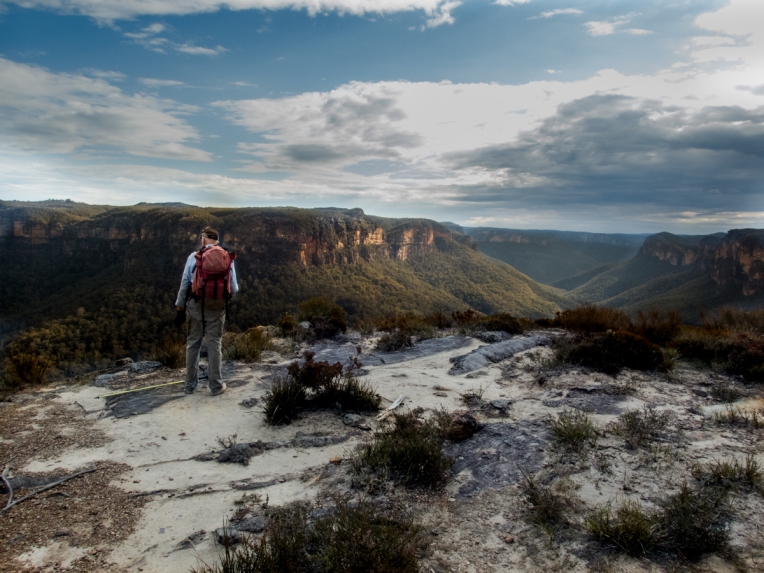 Getting there: This is fairly straight forward as it is signposted off the Bells Line of rd (Chiffley highway)

Turn off the highwya and follow the dirt road down to the car park at the locked gate. There are picnic tables and toilets here. From the car park go past the locked gate then take the left fork to stay on the fire trail. (The Right fork takes a rough trail to the summit, also worth doing.)

The road starts with a few ups and downs before leveling out and winding it’s way round the mount. Stunning rock faces and, at the right time of year, wild flowers help eat up the distance until finally, after about 5kms, you reach the escarpement as it drops dramatically into the Gross Valley with the river some 500m below.

For those so inclined you can continue along the road along the top of the Explorers walls for another 1km or so around the bluff to Frank Hurley Head and more spectacular views.

From the Junction with the spur out to Frank Hurley Head the main road gets a bit rougher though it’s still in reasonable shape to follow it around to the next lookout, Edgeworth David Head. From there it deteriorates further to where it terminates at Zobels Gully before Mt Caley.

Note: The great outdoors is an ever changing place. Bush fires, changing weather, vegetation growth and forestry activities can all affect the trail conditions and thus the difficulty of the walk, or even the drive to the car park. These are a rough guide only and are by no means meant to be a definitive guide . They do not replace the need for adequate map reading and navigational skills

Note 1: Taking care  While reasonably well known these spots are still wild places and care needs to be taken around cliff edges and on the steep trails.  Carrying the right gear as well as having adequate food, water and clothing is important. Always tell someone where you are going and when you expect to get back.

Cliffs in the area are seldom fenced off and are often under-cut. Fragile ironstone ledges can extend out a meter or more yet be only centimeters thick. the rule of thumb is no closer than a body length and a half to the edge without tying into a safety line.

On pagodas this is disastrous in a different way. It’s taken millions of years for the distinctive Platey pagodas to form but one careless footstep can damage the formation. Platey pagodas are unique to our area. Don’t ruin them from carelessness.

Emergency beckons (PLBs) can be hired from Katoomba Police or Blackheath NP office for very little.

Note 3: Maps and Navigation Having the right map, a compass and knowing how to read them is very important when heading into the bush. If you are new to bush walking joining a club or accompanying more experienced walker for your first few outings is a very good idea. I found practicing map reading on well defined trails was helpful when I started out.

The Maps mentioned are the 1:25000 series. They can be purchase at Lithgow tourism information center, from outdoors shops or online for around $10 each.

Note 4: These are wild and beautiful places, respect them. If you are able to carry something in you can carry it out. Don’ be a tosser. Leaving your rubbish behind is a sure way to ruin it for every one else. 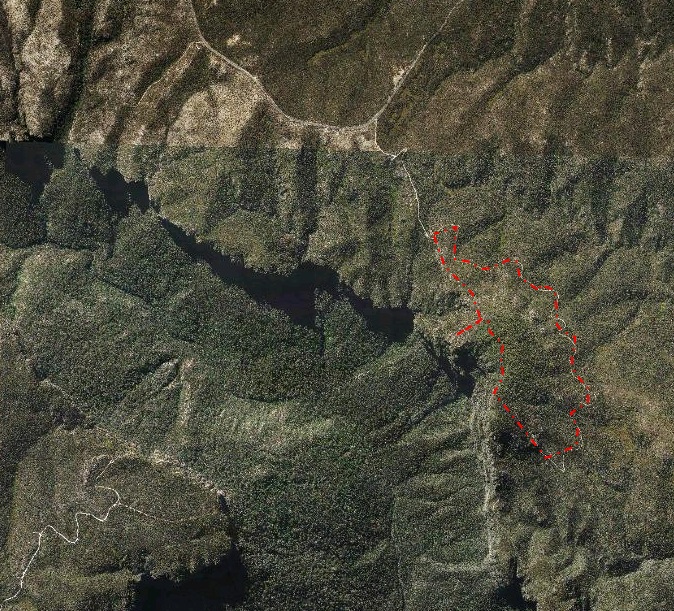 One thought on “Mt Banks”