Hannah Mandy and I

So I’ve been meaning to get back out this way for a while. My first trip to Acoustic Canyon was back in 2002 (I think). It’s a pleasant trip through a short dry-ish canyon within the Pagoda country of Gardens of Stone NP. I had it on the list for this year so when Hannah said she’d like to come on a trip next time we were heading out to Gardens of Stone we locked it in.

The drive up was uneventful. I had debated about whether to head in the way I was shown all those years ago or to try a different route off a different fire trail. In the spirit of adventure we went the later. Parking up we took a bearing and heading into the scrub to the west and it didn’t take long to reach the little water course that would lead us between some majestic pagodas and into the canyon .

The Pagoda canyons around this area have a different feel about them to the deeper/wetter canyons we visit through summer. With much smaller catchments they barely have water flow, if any, so you have to wonder how they have been carved out.

I’ve been reading a bit of stuff recently suggesting solutional processes rather than just erosion may play a big role. ie chemicals in the ground water work to dissolve the silica that holds the sandstone together. Make sense to me when looking at the delicately sculptured formations, recessed chambers and pockets.

Anyhoo, this canyon  is renown for it’s “Acoustic Chambers”. Big cave like over hangs carved (or dissolved?) out of the eastern wall. 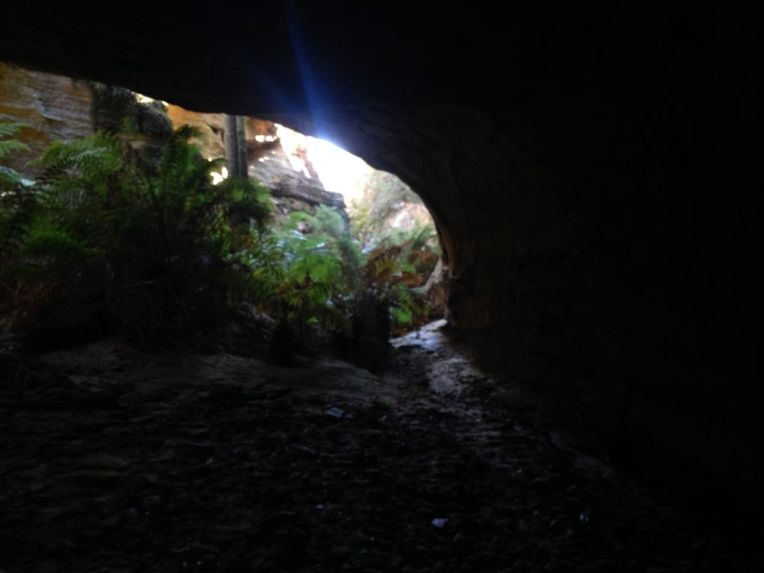 The large chamber is super impressive. Toward the back of the chamber the slightest noises are amplified. I’m sure there was a tiny fly in there today that sounded a bit like the didgeridoo I added to the video clip.

It also has some great examples of the way the ironstone bands permeate the sandstone layers seemingly at random.

As far as I know the ironstone is still a bit of a mystery. For a while people were baffled as to how it ended up crossing layers of sandstone.

It’s seems iron rich water seeping through the sandstone precipitates out as iron stone, sort of like an internal stalactite, but then you get these 3d tube like structures (there are a few in the big chamber if you look about) and that had people scratching their heads. 1 theory is bacteria colonies play a part in how and where the iron leaches out of the water.

That only leaves the question of where the iron comes from in the first place. The most logical answer would be that it leached out of an over lying cap of basalt that once covered the whole area. Except there is no evidence of such wide spread basalt formation… Of course I’ve only read up on the basics so if anyone has more insight I’d love to hear about it in the comments below.

We stop for a quick mandarin and a drink in the big chamber before continuing on down passing a few smaller chambers further along the canyon. Each would be impressive on it’s own but they get over-shadowed by the large chamber.

And we soon reach a big ledge we can follow under a little over hang, 5 or 6 meters above the canyon floor. This brings us to the spot where the walls open out and offers us a bit of a view over the Wolgan Valley. 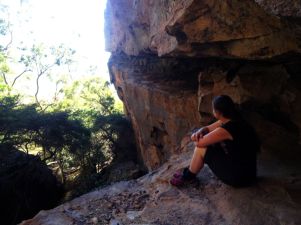 Last time I visited Acoustic Canyon we retraced our steps up the canyon and climbed out an easy-ish (grade 6?) climb up the western wall. Since then I have heard of a hidden slot up the Eastern wall and that’s what we found this time around, hidden to the side of a non flowing water fall (I’m sure last time this had water tumbling over it which may have prevented us looking for the slot).

It was a bit of a step up but someone had stacked stones (loose and wobbly it turns out) to give better access to the first ledge, from there it was an easy scramble to the top of the cliff line 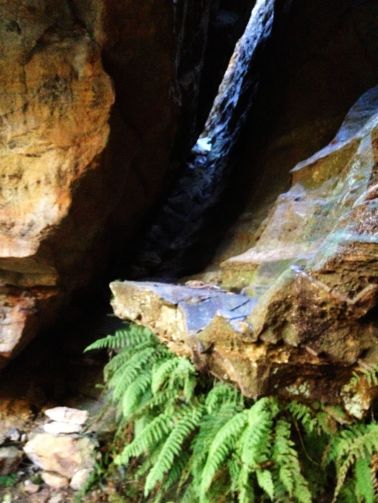 Time:A bit under 2hrs car to car with plenty of faffing about.

So it was barely 11am by the time we got back to the car. You keen to check out some thing else, says I. Sure, says they

Now those playing along at home may recall a slight navigational hick up I had trying to show the guys a feature I like to refer to as the Crack of Doom on a trip that included Zorro Canyon.

Well this time I had better luck. Mind you I did head off the fire trail and into the scrub a tad early which wouldn’t have been a problem except traversing across the scrub meant we encountered the most scrubbiest scrub I have yet to scrub bash. Scrub. Like scruby scrub.

I’m guessing a fire ripped through a few years back as there was so much dead, brittle stuff laying about being slowly consumed by dense regrowth. A couple of hundred meters seemed to take forever.

Anyhoo, this time had no such navigational anomalies and we arrive at the cliff line smack bang on the infamous crack.

We have a bit to eat and a look around at some classic pagoda country while I contemplate how tight a squeeze I remember this being while considering the 20kg I’ve  put on since…. 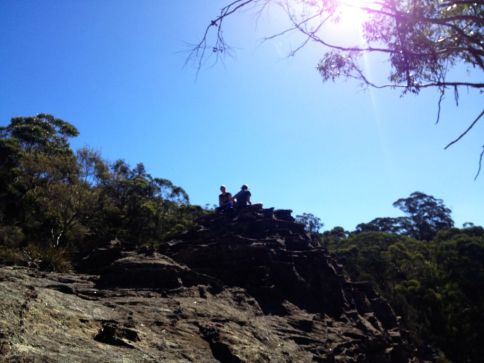 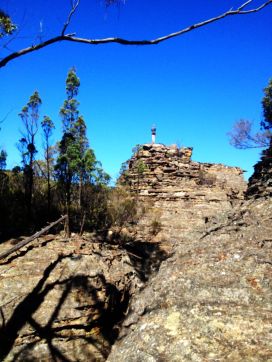 I’m starting to doubt I’m going to fit.  Belatedly I remember a squeeze where I doubted I would fit last time. Well only one way to find out

It starts easy enough but 20m down there is a step where the width reduces to half or less. I begin wedging down, I remember seeing this last time and thinking no way.

It’s so tight now I have to take my helmet off just to turn my head. Below it looks tighter before it opens out.

Damn I had forgot to bring the butter to smear myself in… . In all probability I could probably have squeezed down. But there would be no coming back up. I choose wisely to abort the attempt (Wisely? I have to admit I had a bit of a freak out and though if I encountered a squeeze I couldn’t pass it was going to take a lot more than Mandy and Hannah to pull me out.) and we back tracked. Just getting myself out of the spot I’d squeezed into was an effort.

We turned tail and retreated

Briefly we considered slipping around the cliff top to descend the exit slot, Cathedral Crack, but as it would be a short down and back up we pulled the pin. A return trip should be good motivation to drop some weight….

Of Course i had to return for another go

8 thoughts on “Acoustic Canyon and the Crack of Doom”