I have to say after our scrub bash to nowhere I was fairly surprised the others would still be keen on coming out, let alone head back with the same goal in mind. Something about unfinished business. The more we looked over maps the more convinced we were right there, just misinterpreted the trail notes.

With a whole range of schedules and commitments finding a date where every one was available was the tricky part.

The date was set and eagerness grew. Then Illness struck. Ed rang saying he was crook as a dog. I called Gaz saying I was reluctant to do the trip without Ed as it was his idea in the first place. I was just heading to the chemist to drug myself up, Says he, as I’m the same… Trip off.

It was going to be w while before everyone would be available again.

Then I got the opportunity to do the trip with others who had been there previously and a mid week reconnaissance mission took place. It had me more eager than ever to get the crew back there.

Another date was set.

Another set of circumstance meant not everyone could make it.

Finally 12months later every one was getting keen again. Ed suggested the June long weekend. We had a big MTB race on at Rydal which ruled out Saturday and Sunday. I needed to go to work Monday morning but arranged to go early so I could meet the others around 9.

I threw out an invite to Julie just in case she had a day off and luckily she did so it would be a party of 6.

Well Friday and Saturday pissed down. Like constant drizzle interspaced with good heavy rain. Sunday dried out just enough that the race at Rydal was on perfectly tacky trails but I warned the others that while usually dry above the knees with this rain we might get wet up to our waists… A slight under estimation.

Anyway we met up and made our way down into the Wolgan. A good fog rolled through the valley with the promise of clear blue sky once it lifted.

We made good time up the hill and through an easy break in the cliff lines. Much easier than the first way I lead them 12 months ago.

Julie guided the way and we surprised ourselves by arriving bang on target at the lunch spot above the abseil anchor with surprisingly little scrub to be bashed at all. 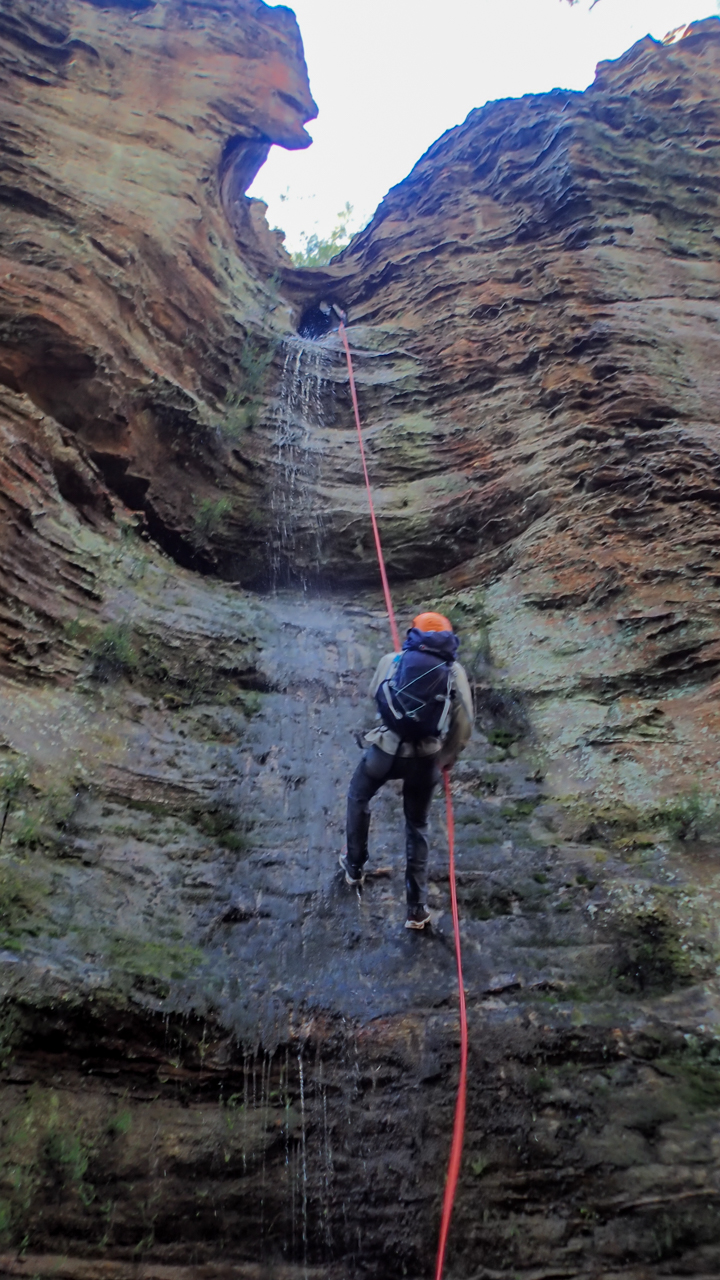 While some tried in vain in the end there was no option but to wade on through, except after we all had, Ed pointed out a high ledge we could have scampered across with a convenient abseil tree almost directly above the end of the pool.

And next is a fun little abseil down through a hole in the rock. It’s almost like a mini Alcatraz  but darker and narrower

Our track notes said 2 ropes needed here but both center marks were on the ground so conceivably its doable on 1 genuine 60m (Note mine is about 63m and the center mark was just off the ground.

Party Size. 6. all experienced to intermediate

time: 5hrs car to car at a steady pace

One thought on “Scrub bash to somewhere”