Devils pinch is one of several canyons accessed via the Pipeline trail just down steam of Newnes. I’d done a  few of the others and was keen to get back for this one as it was reputably one of the better ones in the area.

Ed arrived a my place nice and early and we headed on down hoping to do the climb before the heat of the day. Good plan.

At the car park we debated taking wet suits. We hadn’t used them last year when we did Pipeline Canyon but we had heard the wet section in Devils Pinch was longer, darker and more sustained. We decided to take them, they offer good scrape protection when scrambling down rocks if nothing else. Not such a good plan.

Bags stuffed full we  headed down stream to the start of the Pipeline trail and began the climb up. It starts fairly gentle and we had a slight breeze in the shadow of the tower cliffs above us. The higher you go the steeper it gets and it wasn’t long before I was stripping off my sweat soaked shirt to get a bit of that breeze on my skin.

It still amazes me the effort it must have taken to build the pipeline between Glen Davis and Newnes (not to mention all the way to Newnes Junction near Clarence). Back when men were men and so were women or something and hard work was par for the course.

I bet those guys didn’t go home from work and talk about their feelings. says Ed.

I dragged steel pipes up a mountain all day but Ed was mean to me and called me names. Says I.

Anyhoo. We reach the top, dump the bags and make the short detour to the look out. Man how good does it feel to walk through the bush without a 75l pack stuffed full of gear on your back? (What was I saying about men being men… Yeah na, my shoulders hurt.)

We snap a few photos and then continue up to the watershed (It’s not like an actual shed, Stupid…) and veer off onto the Starlight trail. Once again we lost it somewhere around where you’d turn off for Pipeline canyon but corrected our error and pick up the main trail without too much drama.

Considering the popularity of Devils Pinch canyon I expected there to be a bit of a trail veering off the main track, if there is we missed it but found our way down to the headwaters of the creek without incident.

The heat is getting oppressive now so we are keen to get into the cool of the canyon. The creek threatens to “canyon up” a few times before we reach the spot where it drops down a dark slot. Woohoo.

We scramble along a ledge beside the slot to the abseil point and now have to put our gear on balanced on small stances. Didn’t think that through…

The top section is suppose to be fairly dry should we put wetties on now?

It says the abseil lands in a pool and there are some climb downs into water.

Rather than putting harnesses on now, then doing some deep wades and have to take harnesses off, put wetties on and harness up again we chose to put the wetsuits on now. Bad plan.

I’ve said it before but abseiling for me is just a means to get to the next bit of canyon. But this abseil is really cool. Relatively easy start then a long drop into an awesome slot but one you touch down it keeps going down another dark, narrow drop. About 25m all up, or down I should say.

We’re now in a deep, dark narrow cleft. It’s really beautiful. There is a tight squeeze climb down a twisting chute before we are on the cleft floor. The pool the guide suggested we would land in is nonexistent at the moment, just a damp patch of mud.

Rounding a bend and all too soon the canyon opens out into a wide gorge. Scrambling down the valley the creek bed is as dry as a nuns nasty and the heat is slowly cooking me. We stop and strip the top of our wetsuits down in an attempt to stive off heat stroke.

It was disappointing to see this section of otherwise pristine creek was infected with backberry.And Flys! I’m pretty sure there was an international convention of the bushfly alliance. Millions of them swarming around, we were expecting to come across something dead but nothing, just clouds of flys. I’m pretty happy at this point they weren’t bitey.

Finally, droping down through a layer of strata a small trickle of water appeared in the creekbed. I wasted now time in splashing the cool liquid over my head.

And then we come to the next section of shallow canyon with the welcome sight of a deepish pool waiting at the bottom. Rotting vegetaion leaching tannins gave the water what Ed described as a lovely shade of Earl Grey (What’s that Paul Kelly line about the coffee being the colour of the river but not nearly as brown?) but we pulled the wetties back up and jumped in.

The next section of canyon is really nice. It’s not all that deep but has some narrow squeezes, tricky climb downs and deep wades.

This section is reasonably long and has a lot of fun bits but eventually it drops into another deep narrow section.

Overhanging abseils are nice but usually have shity starts as you work your way over a tricky lip. This one just gradually turns over hung so it’s a really nice start then a  17m abseil hanging in space.

This section is awesome. Deep and sustained and, despite being midday, the play of light on the walls was divine. 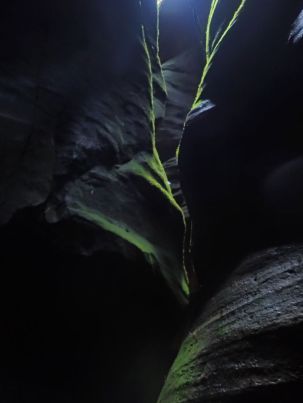 We come to a slightly wider chamber and Ed points down to a funny looking rock. Look a skull. Oh yeah a wallaby skull, fair size. Must have fallen in…. Oh shit goanna.

Sitting on a rock about 3feet away is a small, beautifully patterned lace monitor. I guess that’s who dragged the wallaby in. It’s dark and cool in here but it turns out it an easy walk up from the exit portal so I’m pretty sure it hasn’t fallen in and become trapped. Unfortunately around the corner is the remains of a much larger one, just under 2m long.

The rest of the canyon is an easy walk down a sublime slot. 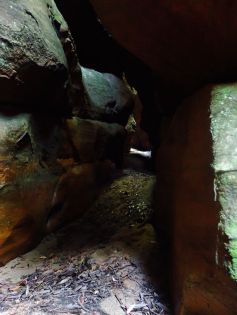 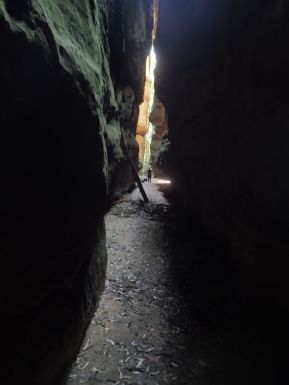 At the exit portal we get out of the harnesses and wetsuits and eat lunch in the shade enjoying the cool breeze drifting down out of the canyon.

Once fed we opt to by pass the final two abseils and scramble down beside the steep gully to the Wolgan river before commencing the 5km hike back to the camp ground. It was hot, damn hot and our water was getting low. When we did Pipeline canyon the weather gods blessed us with a cooling down poor of rain on the walk out. No such luck today.

A hot but very worthwhile trip.

Time: 6.5 hrs car to car. Bit of Photo Phaffing, not rushing but moving steadily all day.

On such a hot day it would have been fine for most people without wetsuits. The water was cold but the pools short and there were plenty of little patches of sunshine flooding in.

I tried the helmet mount for the go pro, didn’t have the angle right for much of it so most of my clips were unusable, I’ve salvaged what I could…